By now, it should be clear to readers of this blog that I have a Google alert set up to notify me of proposed laws or ordinances related to bills restricting "distracted walking," a practice typically defined as walking while looking at a cell phone or other electronic device (almost always while walking across streets).

Yesterday's notification brought me news from the City of Baguio in the Philippines. The City Council has calendared for second reading an ordinance that will restrict pedestrians from walking across streets while distracted. The Philippine News Agency reports:


The city council here is hearing a proposed ordinance, authored by the Councilor Scout Official For a Day (SOFAD), that prohibits and regulates the use of mobile devices and other distractive devices while walking and crossing the streets and sidewalks to ensure public safety.

“The said ordinance aims to prohibit pedestrian walkers (from using) any distract(ive) tools that could lead them to an accident," Councilor Peter Fianza, member of the Committee on Public Protection, Safety, Peace and Order, said in an interview Tuesday.
The proposal was calendared for second reading during Monday’s regular council session.

Fianza said once approved, the ordinance requires all pedestrians to be vigilant when they walk on the street and not to use gadgets, such as mobile phones, books and other objects “that distract someone’s line of sight.”

What is this about a Councilor Scout Official For a Day?


The city government has institutionalized the scouting program during October, annually giving boy and girl scouts, from elementary to high school who are enrolled in private or public schools, to sit as officials for a day after a screening process conducted by the Girl and Boy Scouts of the Philippines.

I see. Well, since there is no link to the ordinance, and since the City website's link to the legislative monitoring system appears to be broken, do we know exactly what kind of conduct the ordinance bans, and, in particular, whether the ordinance defines "distractive devices?"


[I'm afraid not. Like nearly all journalists, I refuse to put a link to the text of the ordinance in my story even though this would be very helpful to readers, particularly those who read and apply laws for a living and who may provide more in-depth commentary on the law or case being discussed].

Shoot. Well do we at least know what sort of punishment there would be for a violation of this ordinance? I'd guess that the penalties aren't that high, since comparable laws and proposals in the United States only involve relatively low fines like $20.00 per violation.


Once approved as an ordinance, violators will be meted a penalty of a PHP1,000 fine or render community service for the first offense . . .

Ouch! Where would someone get an idea for a law like this in the first place?


Fianza said the concept of the proposed ordinance was based on the anti-distracted walking measure in Honolulu, Hawaii.

As far as I can tell, Honolulu was the first city in the United States to ban "distracted walking" while crossing the street, and it has kicked off a bit of a trend of other cities and at least one state (Connecticut) considering or enacting similar bans. This is the first instance of which I am aware where a city in a different country has proposed a similar ban that is explicitly inspired by Honolulu's ban.

Notably, though, this is not the first time a ban like this has been proposed in Baguio. The Herald Express reported in December 2017 that City Councilor Leandro B. Yangot, Jr. proposed a similar ban, although that report indicated that the measure would prohibit a person from crossing "a street or highway while viewing a mobile electronic device in a manner that averts his or her visual attention to the said device." Again, this is only a quote from the report, as I cannot locate the text of that previous ordinance. The penalties for that 2017 proposed ordinance would have been:

Tough, although I presume that this previous ordinance did not pass in light of the recent, similar proposed ordinance. The old proposal was at least a little more narrow, however, as the most recent proposal would ban looking at objects like books in addition to the typical phone or electronic device.

Without the text of the ordinance, there is not much more for me to say other than to repeat my point that such bills are misguided because they ban common practices and will likely lead to selective enforcement. They also will likely not deter people from walking while distracted, because the danger of being struck by a vehicle is apparently not enough of a deterrence. This most recent proposed ordinance is particularly notable as an example of how lawmaking in the United States -- including silly lawmaking -- may have an expansive impact, not only in other American cities and states, but in other parts of the world.
Posted by Michael Smith at 6:45 PM 3 comments:

Following up on my prior monitoring of the length of Breyer questions, yesterday's oral argument in Lamone v. Benisek prompted the following question/hypothetical from Justice Breyer: 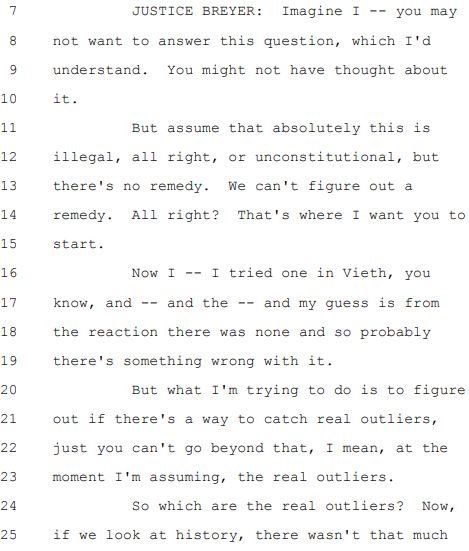 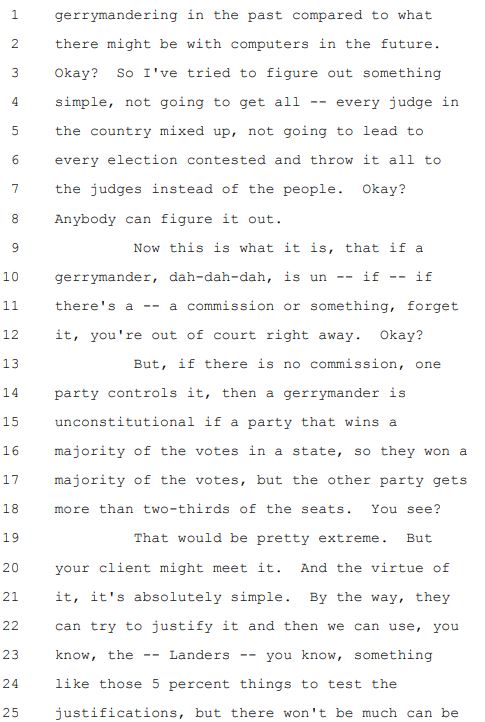 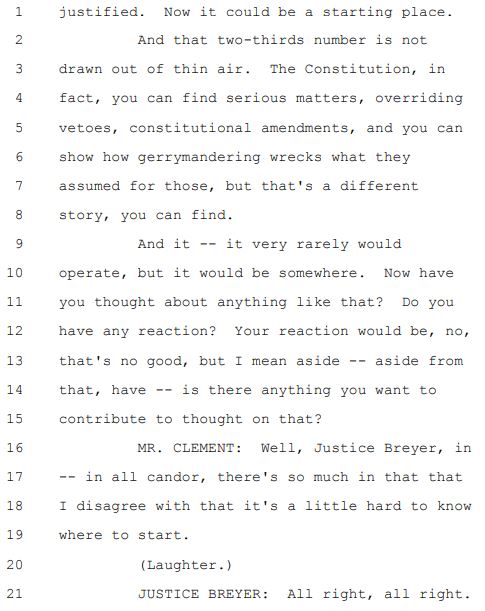 This 59-line Breyer "question," or "Breyer Page" appears to be a new record, as the last record I've been able to locate was a 57-line Breyer Page in Gill v. Texas that Josh Blackman flagged back in 2017. Audio of the argument is not yet available, so I do not know yet if this is the longest Breyer Question ever asked in terms of length of time.
Posted by Michael Smith at 11:34 AM No comments:

The Hartford Courant reports on a "Distracted Walking" law that is making its way through Connecticut's legislature. From the report:


The General Assembly’s transportation committee was voting Wednesday on a bill that would make it a fineable offense to cross the street while looking at your cellphone.

“This is really about trying to protect the person who should be aware when they’re putting themselves in front of a two or three ton vehicle barreling at them … if they’re not paying attention they will lose that battle,” said Sen. Carlo Leone, D-Stamford and co-chair of the committee.

Rep. Roland Lemar, D-New Haven and the committee’s other co-chair, said he started out opposing the bill, reasoning that walkers “present the least danger” in terms of causing traffic accidents.

“As I heard from more and more people, this is a shared responsibility that we have,” he said. “We do have things like distracted driving, so distracted walking is a reasonable standard that we should establish.”

The bill is S.B. No. 825 and can be found here. The bill is of note because it is, to my knowledge, the first state-level legislation that would restrict the use of electronic devices while walking across streets. A few towns have passed restrictions like this, but I am not aware of any states that have done so.

From the text of the bill:

Section 1. (NEW) (Effective October 1, 2019) (a) For the purposes of this section, "mobile electronic device" means any hand-held or other portable electronic equipment capable of providing data communication between two or more persons, including, but not limited to, a mobile telephone, a text messaging device, a paging device, a personal digital assistant, a laptop computer, equipment that is capable of playing a video game or a digital video disk, or equipment on which digital photographs are taken or transmitted, or any combination thereof, and "viewing" means looking in the direction of the screen of a mobile electronic device.

(b) Except as provided in subsection (c) of this section, no pedestrian shall cross a highway while viewing a mobile electronic device.

(d) Any person who violates the provisions of this section shall, for a first violation, receive a warning and, for any subsequent violation, be fined twenty dollars.

This restriction is narrower than Honolulu's ban (examined in painstaking detail here). Connecticut's proposed restriction applies to a smaller range of devices, as it includes the important qualification that a "mobile electronic device" affected by the bill must be capable of providing data communication between two or more persons. Honolulu's ban, on the other hand, applied to devices that either provided for communications between two or more people OR were capable of "providing amusement." This means that even if someone is fiddling with an iPod while crossing the street, they will not violate this law, provided that their iPod is a model that cannot send messages or texts to other people. Of course, it seems that no one (including me, for the most part) listens to music on anything other than their phones while walking anymore, but now there may be a reason to dust off the old devices.

Unlike Montclair, California's terribly-drafted ban, the Connecticut bill only applies to instances where pedestrians are "viewing" the device, which the bill defines as "looking in the direction of the screen of a mobile electronic device." Honolulu uses a similar definition. This is narrower than Montclair's ban, which also applies to listening to devices with headphones.

As I've noted before, I generally oppose restrictions like this. Bills that prohibit common practices like this are likely to be unequally enforced in light of widespread violations will occur, and enforcement will be left up to the discretion of law enforcement officers. Broad grants of discretion like this are likely to disproportionately impact racial minorities, the poor, and others who officers believe are "suspicious." While this bill isn't as broad as Montclair's ban, it is still more than is necessary. And, as I've also noted before, while proponents of the bill may argue that its twenty-dollar fine is low, this amount is still burdensome to some and it can add up for those who are repeatedly cited -- a likely occurrence for a prohibition on common activity.

As for the status of the bill, on March 20, 2019, the Transportation Committee voted in favor of the bill, and as of today, the bill has been submitted to the Legislative Commissioner's Office. From there, it may be voted on by the legislature or it may proceed to a different committee (at least, that's what I've been able to grasp from this cheat sheet on Connecticut legislative procedure). Hopefully the bill will be referred to another committee to die, or the legislature will vote against it, as it is an unnecessary restriction that may prompt other states and towns to follow suit.
Posted by Michael Smith at 1:17 PM No comments: